Sign up to receive our News & Views or Alerts 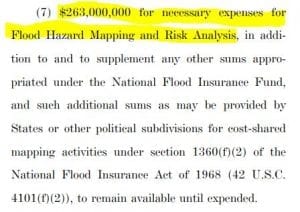 As you may have heard, on Nov. 10 the U.S. Senate announced all 12 of its Fiscal Year 2021 funding measures and the FY21 subcommittee allocations. Of greatest interest to ASFPM members is the fact that the Department of Homeland Security bill indicates $263 million for flood map funding! This equals what’s in the House bill, and maintains the same high level of funding as last year.

The omnibus still needs to be negotiated, passed by Congress, and signed by the President, but this is a very positive development. We had been led to believe that flood map funding was at risk of being cut in the Senate and immediately swung into action.

In September, we launched our very first advocacy campaign through the new ASFPM Engage platform and a number of members answered the call to action. Just under half of all U.S. Senators received at least one letter about the importance of flood map funding in their states and communities. Thank you to all who contacted their Senators. In addition, ASFPM partnered with other organizations to send a joint letter supporting robust flood map funding.

The ASFPM policy team will be reviewing the rest of the bills for programs that we typically would support. You can review what was in the latest Senate appropriation bills here.